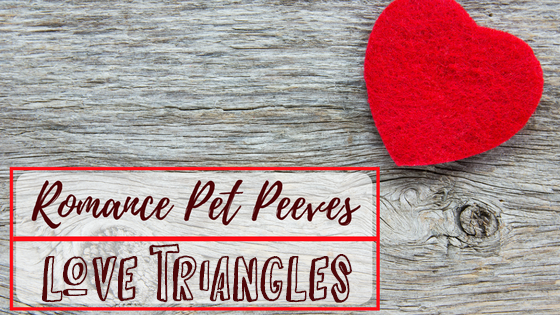 Some of you just shuddered, for good reason. Many love triangles in fiction are done badly. That is not to say that every love triangle is inherently bad (I’ve seen them done well, too, and I’ll mention at least one example in this blog), but with the success of Edward vs. Jacob in Twilight, some writers have pushed them into stories without quite understanding what they’re doing. Others know exactly what they’re doing–but don’t seem to mind that they’re driving readers crazy.

(EDITED TO ADD: I have not read enough gay/lesbian fiction to speak authoritatively about love triangles in those genres. So the pronouns I use here follow the prevailing trend in hetero-romance, which is one girl deciding between two (or sometimes more) guys. But feel free to switch up the pronouns to fit what works for the genre you like to write/read. In addition, if you’re an anime fan, there are lots of examples where a host of ladies throw themselves at a nerdy/clueless guy).

There are two major issues inherent to the love triangle that make writing them a difficult proposition.

1) LOVE TRIANGLES SHOULD BE EQUILATERAL

In order to be a balanced love triangle, each of your potential romantic choices needs to be equal in terms of desirability. But making them too-equal leads to the shattered dreams of half of your readers, because in a traditional, two-person romance, your heroine can choose only one of her heroes. (Not-so-coincidentally, this path is also strewn with fanfic about the other guy). To avoid alienating readers (or to avoid making an impossible choice), many writers take the easy way out and make one of the options so wrong for the heroine that everyone in her life should be shouting at her to run away screaming. These men are often abusive, manipulative, violent, and full of rage. Or sometimes they’re weak, indolent, and leach off the heroine. But they are all awful and don’t belong in a relationship with anyone, much less our leading lady. I consider this to be lazy writing, and not really a love triangle at all. To stick with geometry metaphors, these stories represent a straight line between two points (the romantic couple) with a third, unconnected point off to the side (the crazy/lazy guy). It’s ultimately not satisfying when the heroine and hero end up together, because there was never any real question of who she would choose.

2) THE THREE MUST BECOME TWO

Unless you’re writing ménage à trois–which does not count (in my opinion) as part of the love triangle trope, despite being the (perhaps) ideal of the metaphor– you’ve got to make a choice between the two potential love interests. This can be a problem in a long-running series, because many authors put off the choice FOREVER. Janet Evanovich, I am looking at you. With the Stephanie Plum series as an example, you have your “Team Morelli” and “Team Ranger” fans who will each give you lots of reasons why Stephanie should choose their favorite guy. Evanovich is happy to keep the question up in the air as long as the books are selling. But eventually, even she is going to have to make a choice when the series ends. That choice is going to piss a lot of people off, no matter which way she decides to go. And in the meantime, many readers (like me) are sick of the back-and-forth between the two men, and have stopped reading. The books do still sell, but if you look at the Amazon reviews for the later titles, you see more and more people objecting vociferously to the ongoing triangle.

Another issue here is that love triangles that will not die are often used to create conflict in the same way as separation, which I talked about in my last blog post. Writers are afraid that if they let the triangle collapse down to a couple, they won’t have any more conflict. That’s bullshit, and shows a distinct lack of imagination and creativity. Or just prejudice against romance.

(Caveat here–Evanovich said once–in an interview given early in the Plum years–that Stephanie would end up with Joe (she has since recanted and left Stephanie’s options open) and settle down, and that would effectively end the series, because after marrying and having kids she wouldn’t want to endanger herself as a bounty hunter anymore. So while this falls under the heading of “no more conflict after the romance resolves,” I will give her a pass. I just think that the series should have ended about 10 books ago.)

TAKEAWAY: READERS HAVE A LOVE/HATE RELATIONSHIP WITH TRIANGLES

Both of these potential pitfalls are dangerous in terms of having your love triangle alienate readers. The first way, your readers are going to think your heroine is an idiot for even contemplating the abusive asshole. The other way, you (the author) are either going to pick the “wrong” guy, or your readers are going to eventually want to scream “just pick one already, I don’t even care which one anymore!”

So what’s the answer?

It is possible to write a love triangle where the choices are equally desirable but one is your heroine’s match. Eloisa James did this well in Four Nights with the Duke. Ward is absent for most of the book, so we get to see Mia and Vander together, falling in love, and we (the readers) know they are clearly right for each other. Even though we’re sympathetic to what Ward went through and think he’s still a great guy (which is good, since he’s the hero of the next book), he’s just not the right guy for Mia.

This should be the ideal–the right guy for somebody, but not for your heroine. It also helps (in terms of making readers happy) to then tell the other guy’s story, so he gets to have his HEA, too. Or, you can make the plunge into ménage and let your heroine keep them both!

Side note–I absolutely did not intend to write a love triangle in A Theft of Magic. My editor pointed out that there are hints there, so I deliberately tried to undercut them and defuse any potential romantic interest between Lucien and Sorcha. They have a connection, but it isn’t a romantic one. You will see Lucien again. There is more to him than has been revealed.