Sex and Magic: The Allure of Enchantment

In a previous post, I discussed some of the general context for why I like mixing magic and sex. In this post, I’ll get into the nitty-gritty details of adding magic into a sex scene.

There needs to be an emotional content to any sex scene, or else why is it in the book? But having magic available as a storyteller gives me the ability to have the characters literally share emotions as well as their bodies. Sometimes, they share physical sensations, thoughts, and images, too. Magic opens a whole world of possibilities that are not available in a mundane world.

Here is a brief snippet from A Merge of Magic, the serial prequel to the Fay of Skye series I am currently releasing on Kindle Unlimited:

Pleasure and a burst of warmth at her accomplishment washed through Viola. Her strawberries-and-cream magic, with its hint of vanilla and spring water, suffused his senses. He wanted to lap her up, to lick every inch of her.

Her desire answered his, passion quaking between them as images of their bodies joined cascaded through his head. But the imaginary coupling was from her perspective, with the sensation of stretching and fullness instead of constriction and penetration. Ian panicked.

We’re done. Get out of my head.

This is early in the main characters’ sexual relationship, although they have been friends since childhood and have secretly been in love with each other for five years. I am using their magical connection to deepen their emotional bond—but it’s happening too fast because of the magic, and so they both aren’t ready for the intensity of the experience.

Here’s another example from Essential Magic, the first book in the series:

The connection sang through thick ropes of magic that wrapped around and through their bodies. She almost cried out when she saw the pulsing web of power now suffusing them. Every move that they made raised a kind of magical energy she’d never known existed. It pulsed along their nerves, pumped through each artery and vein, poured out of Mal and into her and back, growing stronger and more powerful with every thrust of his body into hers. Her hips rose to meet him, and his head lifted from her breast so he could stare into her eyes.

Etta met his gaze and everything else fell away. There was only Mal, and only her. Then there was only one being, striving as one flesh, straining toward and finding a peak of pleasure so intense that every other sense shattered.

One final, longer example comes from book two, A Theft of Magic. It’s from the midpoint of the novel, so you might consider it a spoiler, but I’m of the belief that good books can’t be spoiled. And let’s face it—this is a romance. We know there’s going to be a HEA. We just aren’t sure how the characters will get there!

His magic met hers with an almost desperate surge, all of his desire and need rising to meet her as she grasped his cock and lowered her hips. She sank onto him with a moan, and he grabbed her arse as she gripped the side of the tub and began to move.

Everything smelled of apples, of Ronan’s true magical scent, of the secret self he tried to hide with years of bitterness and salt. But she could see it—could taste and hear and feel it. The man who had this sweet, crisp, sensual center was entirely worth fighting for.

If only he would allow her to.

She kissed him, letting her tongue and her lips say against his what she could not form into speech. Except, with magic, her thoughts washed over him like the water that splashed against the tub, and all her words flowed into him. You are more than your fears, more than your past.

Heat and pulsing pleasure built and crested, again and again as she rocked against him. His passion twined and twisted with hers, and his pain and his doubt. I have nothing left to give you. It’s all been taken away. I’m not enough.

Love doesn’t ask for anything, Ronan. I don’t need anything from you. She broke the kiss and moved her hands to his chest. His heart pounded against her palm, but she focused on his storm-grey eyes. I love you, and I’m not going to stop. Take my love. It’s yours.

She ground her hips down, hard, and rode him until he gasped and groaned, and her own release gushed in a flood of his water magic, illuminated by a million sparkling points of her light.

Sorcha and Ronan are a fairly lusty couple, coming together physically early in the story but taking much longer to accept their love for each other and the possibility of a long-term relationship. This scene is a very poignant encapsulation of both of their emotional states: Sorcha has reached her first turning point. She is becoming more confident in herself and is willing to express her love and take the risks, to fight for what she wants. Ronan continues to feel he is inadequate and unworthy, but craves her love anyway.

This scene could have played out with them speaking their lines instead of thinking them to each other, but the magic and intimacy of mind-to-mind connection forces Ronan to accept what she is feeling in ways that a mundane coupling could never produce.

I don’t think I will ever write a non-fantasy story (although never say never, I suppose). At least, I don’t intend to. I love this genre and the freedom it gives me to explore deep emotional connections between people and physical and spiritual connections to the world and humanity in general. And magic sex is super hot.

To keep reading the books excerpted above, visit any of the following retailers: 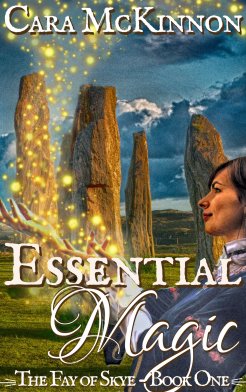 Essential Magic, The Fay of Skye Book One

A Theft of Magic, The Fay of Skye Book Two 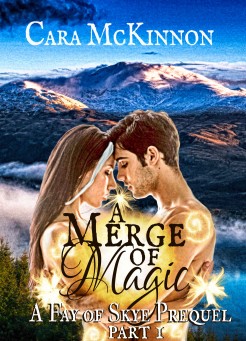 A Merge of Magic, A Fay of Skye Serial Prequel

$0.99 or free with your Kindle Unlimited Subscription